With the Winter Meetings having just wrapped up, the Hot Stove has heated up with huge trades and signings. Already big names are changing cities and signing their names to multi-year deals. Two of the biggest signings so far have been pitchers; Patrick Corbin signed a six-year, $140 million contract with the Washington Nationals and Nathan Eovaldi signed a four-year, $68 million contract to return to the World Series Champion Boston Red Sox. While the value teams are getting from these signings is yet to be determined, using biomechanics data and Motus’ research on workload, we can examine the platform year and assess their potential for success under their new contracts. 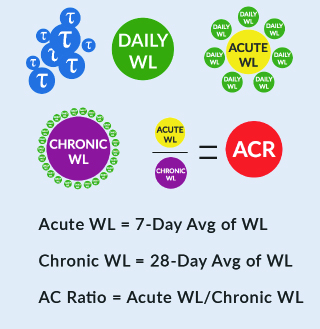 Perhaps a larger indicator of fatigue and performance is a pitchers’ acute and chronic workload- how much he has worked over the last week and over the last month. While every pitcher is unique, these suggested workload ratios offer the best opportunities for pitchers to stay healthy throughout the season and avoid fatigue. The sweet spot is an AC ratio (Acute WL divided by Chronic WL) of 0.8 to 1.3, which allows pitchers the best chance at avoiding pitching with excess fatigue. Research with the motusTHROW sleeve has found that throwing with an AC ratio over 1.3 increases throwing arm injury risk by a factor of 25x (Mehta et al). While we don’t have access to every pitch thrown in bullpens and side sessions, we can use available pitch count data and average patterns from the motusTHROW database to estimate pitchers’ workloads. From this, we can calculate a pitch count limit that keeps the pitchers AC ratio under a 1.3. Together with the mechanical rankings, this analysis offers compelling data for scouting and operations staff to better evaluate and procure talent.

Based on their 2018 performance, it is easy to see why Corbin signed for a larger and longer deal than Eovaldi. Corbin was healthy the whole year, pitching 200 innings over 33 games, going 11-7 with a 3.15 ERA. That amounted to a 4.8 WAR for the year and a 12.4 WAR for his career. Eovaldi, on the other hand, began the season with loose bodies in his elbow and didn’t make his first start until May 30th. He made 21 starts in the regular season, going 6-7 with a 3.81 ERA over 111IP, for a 1.5 WAR in 2018 and 9.0 WAR for his career. But were their biomechanics indicative of their performance? Let’s dive into them both to see. 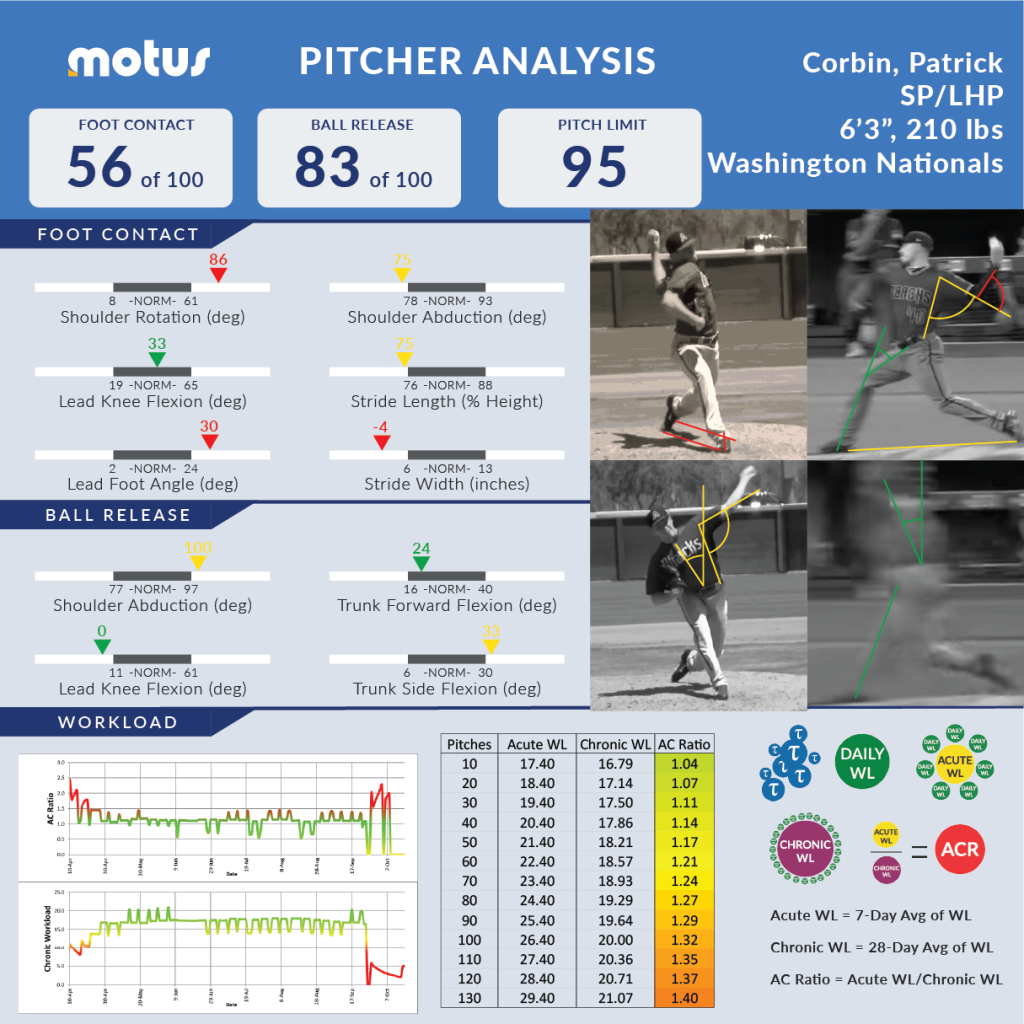 While Patrick Corbin gets himself into a decent position at ball release, his mechanics at foot contact leave a lot to be desired. He maintains good flexion and extension in his lead knee throughout his delivery, but his hips are closed and his foot turned out at foot contact. This forces him to drastically throw across his body. He also has some warning signs in his upper body. At foot contact, his shoulder rotation is high and his shoulder abduction is borderline low. This means he isn’t lifting up his elbow enough away from his body and he has to move more to get the ball up and through his delivery. We can see this at the point of release, where his trunk is bent over to the side too much (lateral flexion) and his shoulder abduction is high, overcorrecting in order to get the ball to the release point. While he hasn’t been on the DL since 2015, he missed all of 2014 due to Tommy John surgery, which was not a surprise given his mechanics. What may be keeping Corbin healthy now is his AC ratio (acute workload divided by chronic workload). Both are high, but they are consistent, which allowed him to pitch throughout the year and have a high pitch limit of 95 pitches. 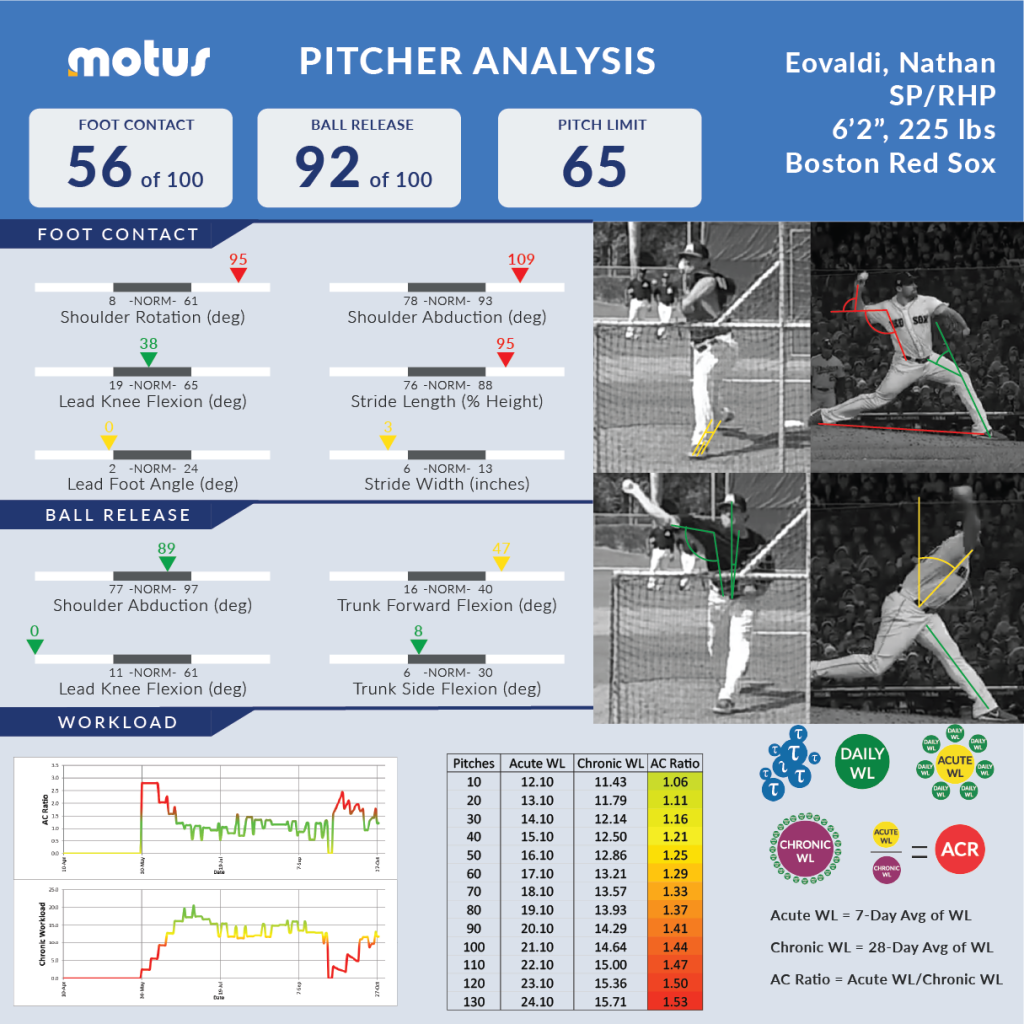 Similar to Corbin, Eovaldi has poor mechanics at foot contact and improves greatly at ball release. In fact, his ball release numbers are even better than Corbin’s, the only negative being that his trunk forward flexion is slightly high (which may aide in increasing perceived velocity by the batter). One of Eovaldi’s best mechanical assets is his lead leg blocking, where he extends over 38 degrees from foot contact through ball release. Yet at foot contact, he has a long stride, highly over rotated shoulder, and large shoulder abduction angle, which puts pressure on his shoulder and elbow. It is not surprising that he started the season on the DL with an elbow injury as it takes a lot of effort and strain to get his arm and body from the bad position to the better aligned position. Eovaldi also worked a lot less than Corbin, mostly due to the injury but also because of generally lower pitch counts. If you aren’t having success, you are more likely to be taken out of the game earlier. It is interesting to note, however, that he improved his AC ratio throughout the postseason, even though he was not used consistently as a starter throughout the Red Sox World Series run. In fact, the fact that he worked more frequently and in varying amounts (similar to pitching bullpens and side sessions in between starts) helped build up his pitch limit from 15 pitches to 65 pitches. 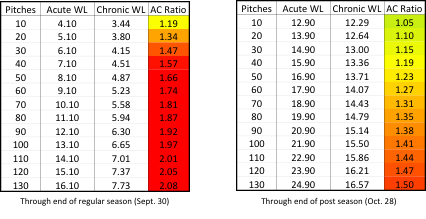 Neither Patrick Corbin or Nathan Eovaldi have great mechanics from an arm health perspective, especially at the start of their delivery. This forces them both to overexert themselves to get into a good pitching position at release point. When combined with their AC ratio data, we can understand Corbin’s 2018 success and larger contract. As the hot stove season continues, we will continue to breakdown pitchers, both free agents and under contract, and see what their biomechanics tell us about their potential future success. Stay tuned for more! 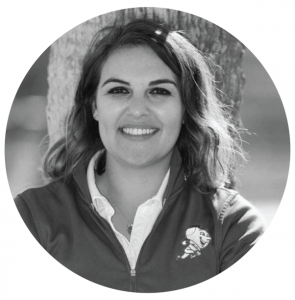 Jennifer Wolf spent the last 12 years working in baseball operations, the last six with the New York Mets. In her role in Minor League and International Operations at the Mets, Wolf was involved with the day-to-day management of the Minor League system as well as various off-field development projects for the players and staff. She was also involved with the Mets complex in Boca Chica, Dominican Republic, and helped International players with their transition to professional baseball and the United States. Prior to the Mets, Wolf worked for the Boston Red Sox, Washington Nationals, Georgetown University Athletic Department, ESPN Stats and Information, and Major League Baseball. She is looking to stay involved in baseball and is dedicated to developing Major Leaguers on and off the field.