What if I told you the pace of play dilemma or MLB’s attendance decline are two small features of a much larger issue?

In order to see what lies beneath the surface of concerns that Major League Baseball currently faces, we must take a deeper look into why the game has changed so drastically over the last 20 years.

Technology; information; research; trends; Tommy John surgery. Arguably a few of the most significant terms that have contributed to baseball’s culture shift over the past two decades. However, that last term should stand out a bit more than its predecessors.

The rate at which pitchers receive Tommy John surgery – a medical procedure conducted to repair the tearing of the Ulnar Collateral Ligament (UCL) – has increased by roughly 47% since 2000; and that’s just at the Major League level. This procedure, which requires about a 10-12-month recovery period, is every bit as harmful to the organization as it is to the player.

While the athlete spends a lengthy and grueling recovery process hoping to get back to original form, his club loses out on his service and continues to pay his contract. In fact, an open source document listing all recorded Tommy John surgeries gathered by Jon Roegele suggests that there have been an estimated $850 million payed to players who cannot physically perform due to Tommy John surgery at the end of the 2017 season.

As a result, organizations are incorporating new ways to try and reduce risk of injury and to ensure the investments in their players are not expended. Such efforts include carrying an extra pitcher on the roster in anticipation of an injury and limiting a starter’s pitch count within a game or innings count within a season.

While organizations that employ these methods may look for gratification based on merit, their efforts are still falling short. In fact, recent data in workload monitoring may even suggest that teams are inhibiting players with methods such as a pitch count or innings limit. Moreover, the game has shifted as a result of these initiatives. As a result, we’ve seen the number of complete games get reduced by more than 50% since 2000.

However, despite efforts by clubs around the league, TJ surgeries continue to rise: 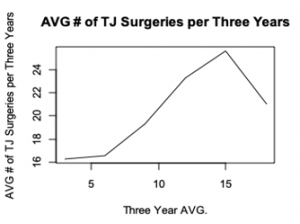 The question then becomes, how can organizations create an environment where healthy throwing patterns are continually practiced and monitored if, clearly, subjective analysis on the matter is not conducive to player optimization? In addition, how can we take all the information that’s readily available today and utilize it in order to bridge the gap between “America’s pastime” and the modern improvements this game so desperately needs?

What Used to be…

In 1982, Nolan Ryan pitched 10 complete games at the age of 35. In 2000, David Wells totaled nine complete games, followed by Randy Johnson and Curt Schilling who both threw eight, and Pedro Martinez who completed seven. 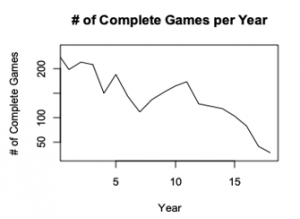 The days of watching pitchers throw 250+ innings and continually “going the distance” has come to a screeching halt. In fact, the game has changed so drastically, that the average number of innings pitched for a starter per season has decreased from just under 200 innings in 2000 to just under 180 innings today: 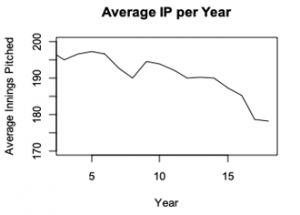 If a 35-year-old Ryan can throw 10 complete games with half the information we have now, why do TJ surgeries continue to rise?

One reason is the rise in average fastball velocity. The average Major League fastball has increased from just over 89 mph in 2000 to just under 93 mph today: 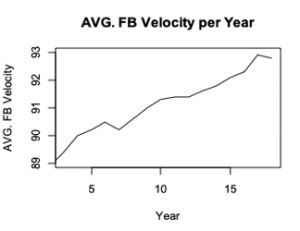 This steady rise in fastball velocity is, in fact, significant. Recent research tells us that the fastball is the most stressful pitch on the arm due to the amount of torque generated in the elbow during the throw.

In baseball speak, fastball velocity is synonymous with the names of guys like Walter Johnson, Bob Feller, and the aforementioned Nolan Ryan. However, there’s a reason why these guys come to mind: they were the outliers of their day because of their fastball velocity. Fast forward to today, and one would be hard-pressed to find a pitcher who throws under 92 mph.

Considering the above, it might seem like baseball has reached a stalemate. One thing we do know: what we’re doing now is not working.

However, there is a solution.

With advancements in technology, along with an increased knowledge on workload management, we can better – and most important, objectively – quantify the appropriate load a certain player should bear throughout a season with…

The idea behind acute and chronic ratios (ACR) is that a player’s acute (7-day period) load, or throws made, is correlated to his chronic (28-day period) load. Determine your ratio of the two numbers, and you get something that looks like this: 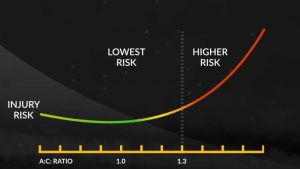 The goal is to ensure players are safely ramping-up in order to withstand and maintain a certain workload throughout the season. According to the picture above, the “safe zone” for athletes lies between an ACR of .7 and 1.3, with anything below or above that range signifying a greater risk for injury.

Hunkering down on innings limits, for example, past the All-Star break may help if a player is returning from injury or, in Ohtani’s situation, needs to assimilate himself with an entirely new culture of baseball. However, when effectively ramped-up to withstand higher loads on the arm, pitchers should be able to pitch past the fifth inning or 100th pitch of a game. Moreover, despite the increase in velocity at the Major League level, workload monitoring suggests that clubs should not deter from using their best pitchers simply because of the inherent risk that comes with throwing harder.

What’s more, a device like the motusTHROW, which incorporates this method of workload management into its intuitive iPhone app, allows players and coaches to easily track individual or team workloads.

Teams are even starting to incorporate sports science departments to help crack-down on the matter. However, workload is only a piece to the puzzle. Considering factors such as sleep, hydration, and nutrition are all largely correlated with performance and proper recovery/injury-prevention methods as well.

“When a flower doesn’t bloom, you fix the environment in which it grows, not the flower.”

With such change and advancement in the realm of technology and information, organizations are still struggling to find the answer to optimizing athlete performance.

In fact, one could even argue that the success rate of Tommy John surgery – as much of a testament as it is to exceptional medical advancement – may play a role in allowing teams to get complacent; essentially disabling them from asking, what else can we do?

Yes, we still have a long way to go in terms of proper implementation and knowledge on the matter in general. However, if we can do more, then why aren’t we? It’s no longer enough to treat injuries as “the inevitable”. We must attack the issue head-on as opposed to being prepared for something to go awry.

At the end of the day, baseball serves as a business. However, any business would be seen as negligent if they were to fail to have the necessary processes in place to keep their employees healthy.

Let this serve as a PSA to all teams from MLB down: what kind of organization are you if you are not doing everything you can to keep your athletes healthy? We can all do better. Let’s start doing something about it now.

Mike is currently a scout with the Collegiate Baseball Scouting Network and writes part-time for Off The Bench Baseball Blog. Formerly a member of Motus Global, Mike is dedicated to working in baseball and hopes to blend his passion for sports with his interest in athletic performance.