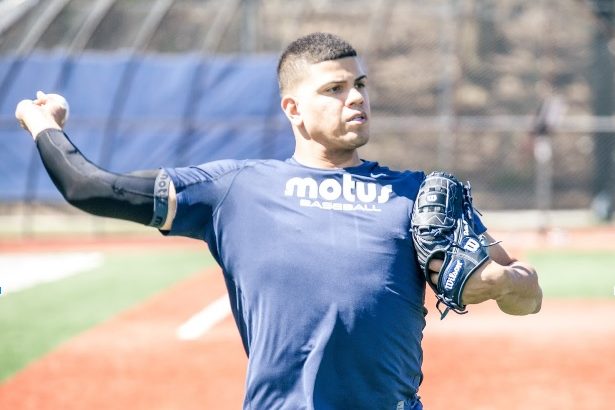 With proper planning, workload management, and the use of a certain compression sleeve with a sensor in it, this could also work in the long term, changing the game. “Bullpenning” is the hot new term in baseball right now. After two games of quick hooks for the starters, the playoffs have shown that a new model of pitcher planning could work, at least in the short term.

The term “bullpenning” comes from MLB Network’s Brian Kenny and his book, Ahead of the Curve. However, the “bullpen game” or “kitchen sink” game is as old as baseball itself. At it’s simplest, bullpenning is simple – take the starter out of the equation, go with the relievers from the get-go, and figure out how to get to the end.

The problem is that’s not really a plan. It might work in one desperation, winner-take-all game, but it’s not sustainable. That takes more of a plan.

Teams have tinkered with the idea of a tandem starter system or “piggyback” for decades. It’s made it to AAA as part of a development program, but no team has tried to take it to the major leagues. In this system, two “starters” are tasked with the game. Each goes a certain amount of pitches, innings, or hitters, then the second comes in. After the second pitcher’s day is through, it returns to a normal system, hopefully deep in the game.

This limits the workload, allows a quicker return, and limits the number of times batters see a pitcher. A fresher pitcher who hasn’t been seen as much is demonstrably better. The downsides are mostly that you need more starters – at least eight – and that defining the “win” is more difficult.

The difference now is that a system like MotusTHROW – a sensor in a compression sleeve that measures stress and workload – can give guidance to the pitching coach and front office about availability. In an era where 13-man pitching staffs are not unusual, it would not be hard to have six to seven pitcher safely and effectively available on any given day.

Recently, I suggested a system where five pitchers would be expected to throw two innings each, every other game. With an 11-man staff,  a team would have an extra pitcher for emergencies, injuries, or extra innings. It’s easy to find relievers who already work under this kind of system in effect, but it would take planning and some good sports science to get them through a full season effectively.

There are an infinite number of ways that this could work, but technology and the game are forcing this forward. Whether it’s a player like Dellin Betances, with his smart compression sleeve on each game, or hitters like Aaron Judge that force this forward remain to be seen, but the first team that commits and executes this plan is going to have an advantage. My guess is that we’ll see this in some form by 2020.