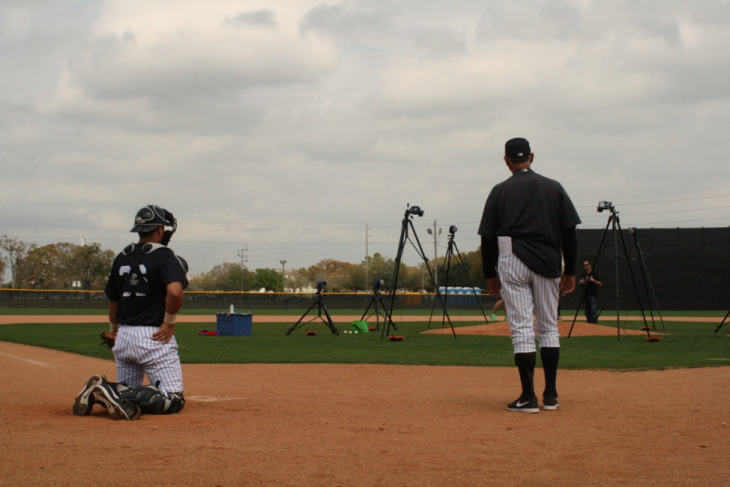 Tau and Omega: what the biomechanics industry has wrong

Since our inception in 2010, Motus has been on the forefront of the biomechanics of human movement. Even though we were the first commercial company to offer assessments with our biomechanics lab, the practice of biomechanics assessments has been around for decades. One of our board members, Dr. Glenn Fleisig, has operated his biomechanics lab at ASMI for over 31 years—with a growing list of Cy-Young alumni and MLB organizations having contracted his prestigious services. These biomechanics tools allow us to ask and answer compelling research questions, as well as analyze an athlete’s biomechanics to unlock hidden performance flaws that are unseen to the naked eye. One of these concepts however, is fatally flawed.

Angular velocities are useless as a performance measure. For decades, peer-reviewed journal articles have cited the importance of angular velocities of the pelvis and trunk for ball/bat/raquet velocity generation in the kinetic chain. The concept of building rotational energy from distal segments to proximal segments is extremely well founded. The problem is that nearly all biomechanics assessments report hip rotational velocity as a measure of power in a player’s performance fingerprint. In this article, we are going to discuss why this is not a useful piece of information and propose a better alternative—rotational torque.

To understand why torque is a better performance measure in biomechanics, we need to discuss what angular velocity is. However, let’s back up even further and start with linear velocity. To measure an object’s linear velocity, you need to measure the change in distance divided by the change in time to reach that distance.

Angular velocity is similar, but measured as a change in angle divided by time. During a baseball swing, the trunk starts out slightly facing the catcher, rotated backwards approximately 25 degrees. As the swing progresses, the trunk rotates towards the pitcher, reaching as much as 80 degrees of rotation near ball contact.

At Motus, we can measure these positions and angles of various segments of the body with very precise motion capture equipment. In our biomechanics lab, we sample at 500 Hz (or 500 samples of orientation or position every second). With our wearable sensors, we sample at 1000 Hz (every millisecond). This allows us to create a time-series graph of position, orientation, or angular velocity throughout the entire motion.

Seen below are rotation patterns and angular velocity patterns of the baseball swing mined from our motion capture database by competition level. As the swing progresses, we can plot the trunk rotation angle versus time of the swing, in milliseconds prior to contact. As the trunk rotates rapidly while nearing ball contact, a large change in orientation is produced by the body over a very short period of time. This change in angle over time represents angular velocity. It is defined as omega, below:

By calculating the angular velocity for the entire pitch or swing, we can begin to put more objective measures to a concept of a kinetic chain. In the figure below, the red line (pelvis) peaks in rotational speed first (right after foot contact), and then the torso speeds up and peaks at a higher angular velocity, and then finally the arm peaks at the highest rotational velocity near the moment of ball release. This is a beautiful concept that has been thought to be quite useful in training efficient mechanics. If segments lower/distal in the kinetic chain produce energy after their higher/proximal counterparts do, an athlete is wasting energy. Generally, we see that there is a bit of separation between the time at which the pelvis and trunk reach peak rotational speeds. In pitching, the trunk peaks in angular velocity about 60 milliseconds after the pelvis does. 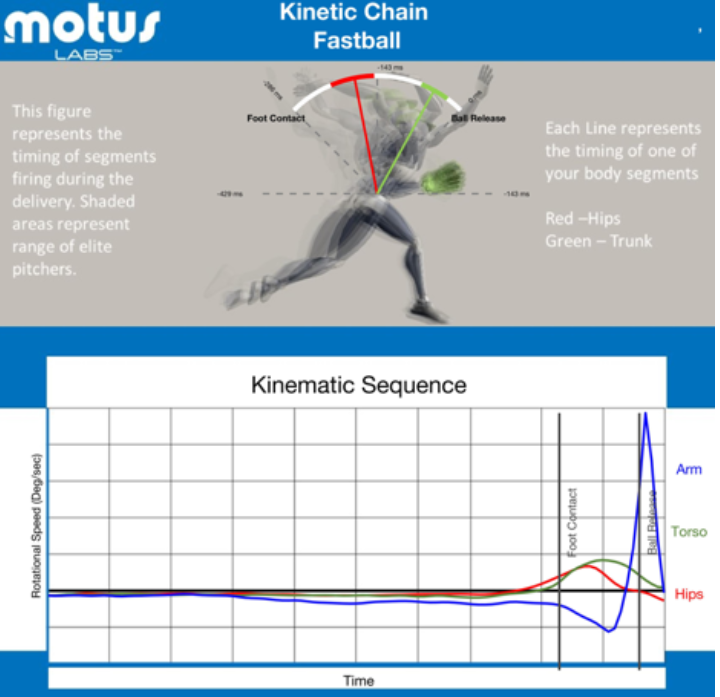 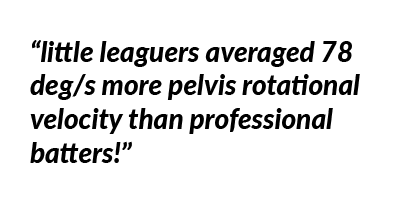 Knowing when we reach our maximum angular velocity is extremely important. But what about comparing the magnitude of those peaks across subjects? Is there anything to be gained there? In 2015, we published a research study comparing the biomechanics of swings across competition levels in 170 batters. When we compared the peak pelvis angular velocities of little leaguers versus professional ball players, we found the little leaguers averaged 78 degrees-per-second more angular velocity of their pelvis than professional batters! How is this possible and why would we rate power in batters or pitchers using their hip rotational velocities if kids rotate faster than professionals? It doesn’t make any sense to me why this continues to be adopted.

To understand why this phenomenon happens we need to understand concepts of force, torque, mass, and inertia. In high school science, we all learn some basic Newtonian physics. One of these concepts is that an object at rest stays at rest unless acted upon by another force. In the linear dimension, this is modeled as force equals mass multiplied by acceleration, where acceleration is the change in velocity divided by the change it time.

For example, if you wanted to knock someone out in a cage match of WWE, you would have to apply enough force to their head to make it move so fast that it causes trauma to the brain. You’d either have to move a really light hand with a ton of acceleration or move a “really heavy” folding table with a lot less acceleration.

A very similar concept exists for rotating objects. In the rotational dimension, this is modeled with torque, inertia, and angular acceleration. There’s a lot of new terms here, but they are all analogous to the linear force version of Newton’s law. Torque represents a force applied a distance from an object (Newton-meters). Inertia is an objects resistance to being rotated (a factor of mass and size), and angular acceleration is the change in angular rate divided by the change in time. Another concept we’ll introduce is that of kinetic energy, which remains constant in a closed system.

A classic example here is something we all experienced in childhood on the merry-go-round (you’ve been cheated of your childhood if you can’t relate). Everyone starts by running around and holding on to the outside of the merry-go-round, and then when you’re running so fast you can’t keep up anymore, you hop on the spinning platform and ride around-and-around at a really fast angular velocity. While everyone is enjoying their now frictionless free ride, some little punks begin to crawl towards the center of the spinning platform. All of a sudden everyone on the outer radius of the platform begins to feel more centripetal force as the platform spins faster and faster. Other kids follow suit, crawl inwards toward the center, and the platform continues to increase in spin rate. All of a sudden, some poor kid goes flying off the merry-go-round. The fun is over. 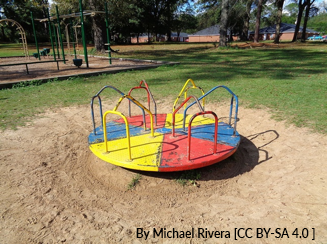 In this example of the merry-go-round, there was no more power added to the system after all the kids jumped on the platform. The kinetic energy remained constant- another one of Newton’s principles. The only thing that changed, was the distance of the mass (the kids) from the center of the merry-go-round. As everyone got closer, the inertia got smaller, causing the angular velocity to increase. Another phenomenon kicks in when that poor kid gets chucked off the platform, in that the total mass drops, causing the platform to spin even faster yet again!

If we can understand the physics of the merry-go-round in grade-school, we should have no problem translating that to the baseball swing or pitch. The reason little leaguers can have such high angular velocities of their pelvis and trunk, is because the moment of inertia of their limbs are so much smaller than an adult. Not only are their limbs and body segments lighter, but the distance to the center of mass of their bodies are also a lot less than big leaguers. There’s much less resistance to rotation when you’re 5’0” 115 lbs.

Another example requires us to re-think our own philosophies. We always touted Andrew McCutchen’s hip speed that was measured in our lab as an example of excellence—having some of the fastest angular rates we’ve ever recorded (over 850 degrees per second). But if you think about it (and do the math), his moments of inertia are less than the average big leaguer. He requires higher than normal angular velocities of his core to generate the same bat speed as his big league counterparts.

So where does this leave us? For starters, we need a way to scale the rotational velocities by an athlete’s size. The most straight forward way to do this is by estimating the inertia of their upper body using their known height, weight, and ball/bat mass. This would help us compute the kinetic energy of their rotational system. But even that is not analogous to our WWE knockout example. The only way to model force and mass in a rotational dimension is with Torque and Inertia. This requires being able to compute the angular acceleration of a body’s segment. Once we have that, computing torque is quite easy.

At Motus, we can compute “trunk torque” with both our motion capture lab, and motusONE console of IMU sensors that have gyroscopes in them (omega). But does trunk torque relate to any performance measures? You bet it does. After mining the Motus database of baseball swings, and running a simple correlation between peak trunk torque and peak bat speed (which occurs at impact, always…), we see a very strong relationship between the two. Batters who generated more trunk torque generated more bat speed (R^2 = 0.60), and bat speed is extremely important. More-so, unlike rotational velocities, we see a strong increase in trunk torque as competition level goes up.

When it comes to the impact physics of hitting a baseball, the principles of impact momentum are paramount. If you want a high exit velocity, you need to swing a heavy stick fast and make good impact. In a perfectly inelastic system, energy is conserved, and the relationship between two objects colliding is as follows:

A wise man once told me you could have the greatest bat speed in the world, but if you’re blind it really doesn’t matter. This couldn’t be more true- if you make poor contact, your delta-velocity at impact will be low. But under ideal impact conditions, a heavier bat moving at a faster speed wins the game. We believe that having faster core segment rotational velocities alone will not help you achieve this faster bat speed, and in fact you need to be able to generate large rotational torques.

A NEED FOR CHANGE: TORQUE BASED ASSESSMENTS

The main purpose of this article is to draw attention to the need to think deeper about evaluating the rotational athlete. Angular velocities are not useful measures of performance because they aren’t scaled by athlete size. Kinetic models such as rotational torque are excellent measures of performance. Beyond this, there is also a greater need to train the rotational athlete effectively. This is a difficult and is extremely complex task. Ultimately we need to work towards a logical set of operations to determine what combinations of external weight, sets, reps, and speeds to program into the athlete’s training plan that build on their weaknesses and capacities. Pure assessment of the pitch or swing does not give enough data to do so.

At Motus, we are going to be releasing some tools to better assess rotational torque in the kinetic chain during the swing and pitch, as well as in the weight room. If you’d like to learn more about our upcoming Tau-Omega tools and gain early access, follow our release on Twitter and Instagram (@motusglobal), or send us an email at info@motusglobal.com. 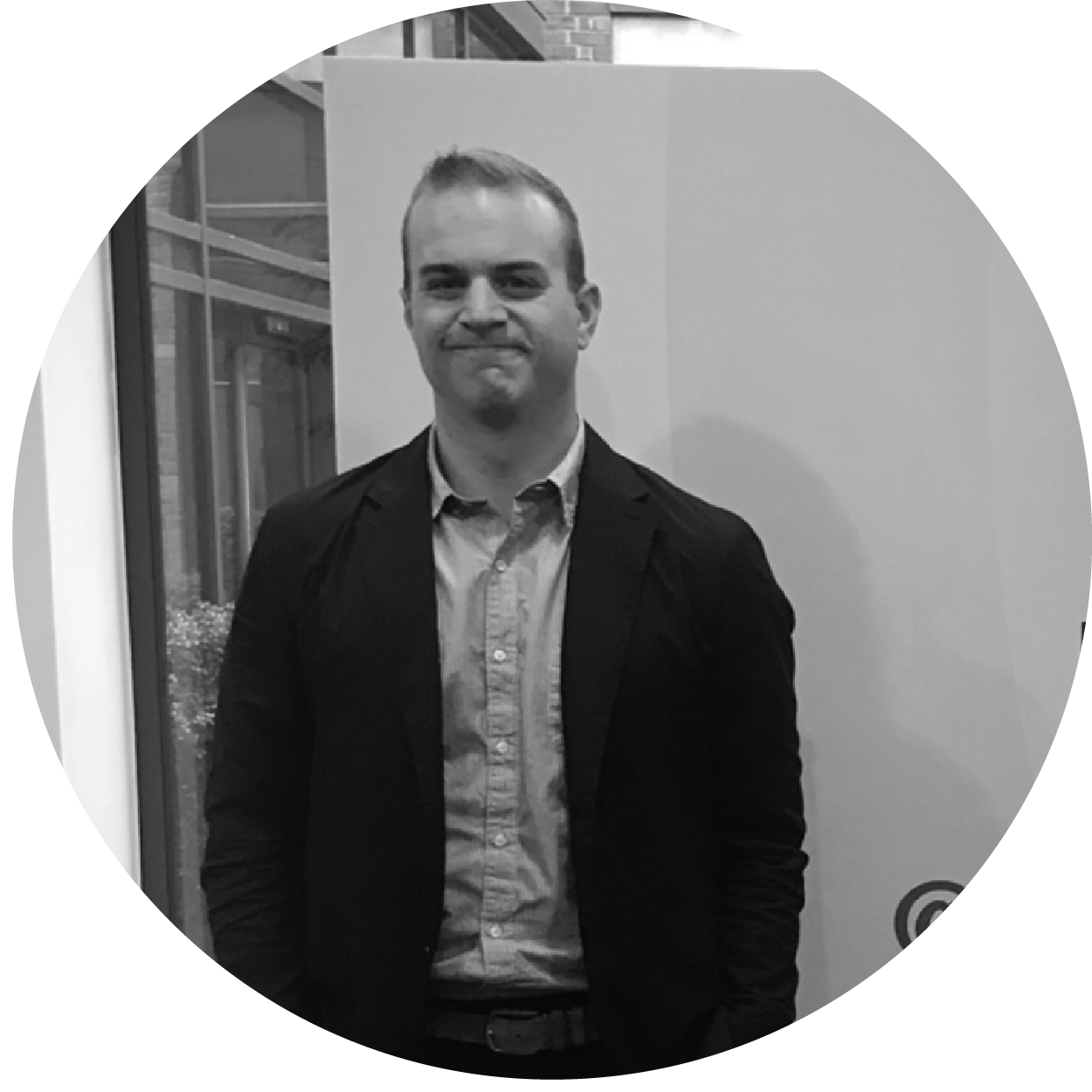 Ben Hansen is the CTO at Motus Global. He specializes in movement analysis software development using wearable technology and motion capture cameras. Prior to Motus, Ben was a biomechanics engineer for the Milwaukee Brewers, helping pitchers, batters, and front office staff reduce injury risk and enhance on-field performance of players. His goal is to help people promote health and wellness through holistic performance data.