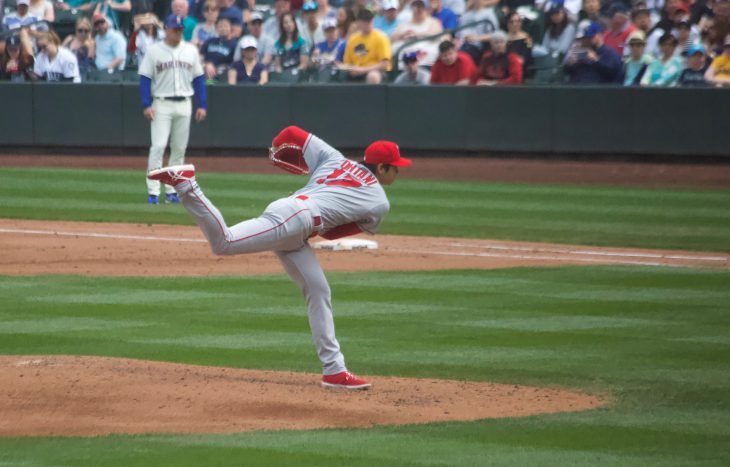 The news of Shohei Ohtani’s elbow sprain came as a blow not just to the Los Angeles Angels, but to baseball as a whole. Ohtani is a world wide star who’s two-way success was like nothing in baseball over the past few decades. As always, the question for any pitcher facing an extended period of time off after an elbow injury, we all ask why and could it have been prevented?

In this case, the data indicates that the answer is yes.

Ohtani came to MLB out of the Japanese system. While Japanese starters tend to throw roughly once a week, they also do extensive throwing programs and tend to go deeper into games. Ohtani was a two-way player in Japan, as well, so his usage patterns were unique there as well as how the Angels attempted to manage his workload.

We’ve seen in many cases that Japanese pitchers do not adjust well to the changes imposed on them by the American system. Daisuke Matsuzaka, Masahiro Tanaka, and Yu Darvish have all had elbow issues despite some success in the US, both before and after the injury.

In Tanaka’s case, he has avoided surgery after the use of PRP and stem cell injections, which is what Ohtani will try with his injury. Tanaka had a very minor sprain, described as about a 10% tear by medical sources. Ohtani’s sprain is described as a grade II, which is usually a much more significant tear. Injections have had success in these cases, with Jon Roegele’s research showing a near 40% success rate in avoiding surgery and returning to level.

The key for Ohtani appears to be his workload and usage pattern. At Motus, we’ve followed the work of Dr. Tim Gabbett and his findings on the acute:chronic ratio (ACR.) We’ve adapted his findings to baseball and tested them, including a published, independent study. We believe strongly that keeping pitchers in the “safe zone” — an ACR between 0.8 and 1.2 — is key to keeping pitchers at all level healthy.

Unfortunately, despite their best intentions, the Angels didn’t do this for Ohtani. While we don’t know the full extent of his side work, we do know the specifics of each start. If we use only this data, we get this chart: 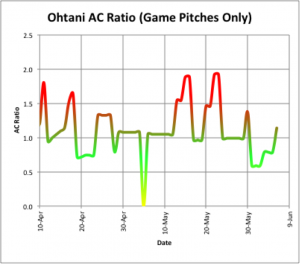 Remember, anything over a 1.2 ACR indicates a significant increase in injury. In fact, going above 1.3 was shown by the above-linked study results in a 15X increase in arm injuries! Ohtani was above the range for almost his entire season, approaching 2.0 at several times. This is an extreme indicator of risk.

However, there’s one apparent event that may be as signficant. The Angels used Ohtani erratically, but in early May they skipped one of his starts, then brought him back to throw 103 pitches in his next start. While 103 doesn’t sound extremely high in isolation, the spike in acute workload was drastic and took Ohtani well out of the safe zone yet again.

Again, I must point out that we don’t have data on what Ohtani was doing on the side – bullpens, long toss, even catch – which would affect his actual ACR. However, we can make some assumptions. Ohtani’s unique situation makes it tough to make a 1:1 comparison however.

There is a unique opportunity to look at someone similar to Ohtani. Garrett Richards also has had elbow problems in his past, including stem cell injections, and has come back to pitch well for the Angels. We took a look at his workload, based on his known starts, shown here: 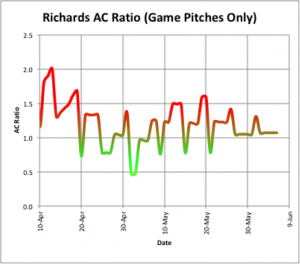 Richards’ high early season workload is a bit overstated here because we know that he was regularly working during spring training, which is not accounted for. However, given the known work plus a reasonable assumption of side work for a “normal” pitcher, Richards’ ACR is still somewhat high. However, the comparison of his workload to Ohtani’s irregular pattern is stark.

We should also be clear that the Angels are hardly unusual. At least two other teams discussed using the same sort of pattern for Ohtani had they signed him. The Angels signed him, however, and have to deal with both the ups and downs of his management.

There were clearly questions about Ohtani’s ability to play both ways in MLB, but there’s no indication that one contributed to the other, unless you believe the usage pattern was enforced by his two-way play. Instead, the usage pattern enforced on him was one that was uninformed by data. Guesses and good intentions didn’t protect Ohtani’s valuable elbow when his workload wasn’t properly managed.