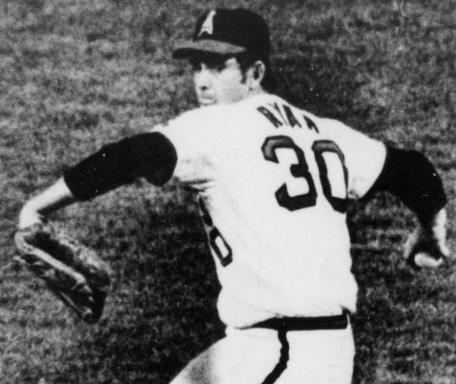 Thirteen innings. Nineteen strikeouts. Ten walks. Nolan Ryan’s outing on June 14th of 1974 was a stunner, especially given the pitch counts of modern baseball, but even in 1974, it was an extreme outlier. Pitchers simply did not go 200 pitches, even in the “single pitcher” era when complete games were the rule rather than the exception.

Ryan is, of course, an outlier in almost every way, but what lessons can we learn not only from this exceptional outing, but his 1974 season? Variously reported as 235 and 238 pitches, almost everyone can agree it was a lot.

At Motus, we believe that the Acute to Chronic Ratio (ACR) is key to understanding and managing workload. Our own Ben Hansen dug into the numbers from 1974 to see if modern workload management can be used to explain Nolan Ryan and give us lessons on how to manage pitchers now.

First, there was some math. While 1974 isn’t in the distant past, we don’t have accurate pitch counts for players in this era. That forces us to use the pitch count estimator rather than accurate pitch counts. It’s shown to be accurate enough that we feel using it is acceptable for a format like this. (Ryan’s noted 238 pitch game was estimated at 242.)

Hansen then ran those estimated counts through the Motus servers and created this chart, which shows the season long ACR for Ryan: 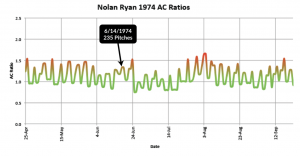 Surprised? I was as well. Ryan is seldom outside the “safe zone” between 0.8 and 1.2. He’s regularly at the high end of this range. The spikes outside the range are often followed with short outings and those short outings often seem to work against Ryan’s health, which is counterintuitive.

In fact, Hansen highlighted one part to me, showing how the rest period for the All Star Game worked against keeping Ryan’s ACR ratio in the safe zone. There are also a couple of low-count outings of 73 and 28 pitches that had noted effects on his ACR. (That 28 pitch outing came on two days rest after a 158 pitch outing!)

Yes, that does indicate that if a pitcher has a quick outing, they should either “complete the workload” in the pen or be made available in relief during the following days. This is again counterintuitive, especially given modern protectionist methods, but the underlying science of workload management is well proven in many areas. It remains to be seen how well it will work in pitching, but early studies indicate a major reduction in arm injuries, even in counterintuitive scenarios.

There’s likely some upper limit to this. Even Nolan Ryan couldn’t go 200 pitches time and again, but a high workload can be sustained if a player can properly build up to it and get proper recovery between outings. This was also suggested in previous research I did back in 2005 for my book “Saving The Pitcher.”

The 200 inning number was a need for any ace, but research showed that the more important number was 190 innings. When a pitcher went above that level, he tended to stay there for years, until he didn’t. Few got back to that level once they dropped below it again. While ACR in terms of innings is a bad measure — an inning is not a consistent measure of anything — it is an indicator that the underlying real measure was being suggested in other ways, like inning limits.

There are a few caveats to this that, even as a pure mental exercise, should be pointed out. First, the pitch counts are estimates. While reasonably accurate, having actual throw counts would be significantly better. Second, these are *pitch* counts only. Every throw counts, so we don’t know how Ryan’s side work, which became very noted later in his career, would have affected these ratios. Third, the early season ACR being outside the safe zone should be ignored. Ryan had a spring training where he was throwing and building up his arm, which can’t be included in this example.

Of course, we shouldn’t discount how unusual Nolan Ryan was. I reached out to Ryan for comment, but he declined. Ryan did things few can do, but perhaps the durability was more than just being a genetic outlier. Few remember that Ryan did eventually break and had elbow issues throughout his career.

These noted, it’s clear that Ryan’s 1974 season indicates that heavy workloads – much heavier than what we see in 2018 – can be handled safely. Not everyone can be Nolan Ryan, but many pitchers and coaches could learn an interesting lesson from Ryan’s workload and workload management.